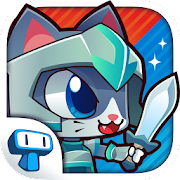 Kittens, rabbits, foxes and squirrels may seem very cute and inoffensive at a first sight. But all they really want to do is bring down your empire! Defend your castle against hordes of enemies!

The game mission is to beat the enemy's attacks and protect your precious fortress. Not only fight their attack back but also leave no stone standing on their castle! Bring it down!

Tree Fortress is a challenging and addictive tower defense game and definitely the cutest of the genre you will ever find. Just don't let yourself be fooled by kawaii creatures because cuteness kills here!

Unlock new characters throughout the game and discover every character unique abilities. Your army of very skilled animals is just waiting for your command to battle!