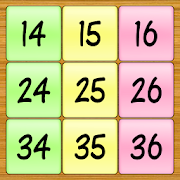 A Number Grid is also referred to as 100 numbers, 100 chart or number chart. It is used to teach kids base 10 visualization. Kids often struggle to use numbers abstractly in problem solving. With the visual tool, they will develop better number sense.

Simply Number Grid is designed to help students develop mastery of these skills through games. Once the number grid is instilled in the child's mind, they will have confidence and find the enjoy of math, which will help develop their cognitive skills and logical thinking capabilities.

2. Find missing, kids will memorize where numbers belong on the number grid

4. Count by, kids will learn to skip count by and the numbers can go to 120, this game will show kids how addition works and also can be used to learn the concept of multiples

5. Reverse count by, this is the opposite of county by, kids can easily see how subtraction works

6. Fill in puzzle, partial numbers grid is shown with numbers missing, the kids are asked to fill in the empty tiles, there are no multiple choices, they have to use buttons to key in numbers, so no guessing. These puzzles will really strengthen the kids number grid skills. They will master the number grid in their mind's eye.

By identifying number patterns in grids, younger students build concepts for divisibility rules, prime numbers, and factoring which are covered in later grades.

The Full version has 6 different mini activities. So does the lite version, but the lite version does not allow you to change the settings and has a smaller set of the fill-in puzzles, no ads are served.

This app is optimized for both phones and tablets.

This product is Common Core Aligned. The full version has numbers up to 120. It can be used with kindergarten, first grade, second grade and third grade students.