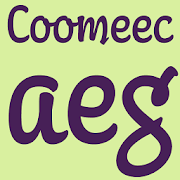 Coomeec™ Pro Latin Flipfont
More than just another cartoon font, Coomeec™ Pro, takes the basic forms of a brush script to a new dimension. Its many small embellishments give the design verve and character.