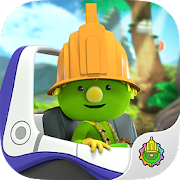 Join Flex as he goes about his busy day in Doozer Creek. Pick up radishes to be delivered to a construction site, pick up peaches and get them to the bakery, and pick up other members of the Pod Squad to take them for a ride!


About Doozers
Doozers are DOERS – they put their ideas into action!
Doozers focuses on four little Doozers, a group of best buds who play together and share a love of inventing. Dubbed ‘the Pod Squad,’ Spike, Molly Bolt, Flex, and Daisy Wheel bounce from one fabulous adventure to the next engaging in exciting projects and having a blast playing together. Doozers know being a kid is a big job. Playing is how Doozer kids (and adults!) practice imagination, communication, ingenuity and problem solving.


The educational mission for Doozers is to inspire preschoolers’ inventive nature through play.


For more information on Doozers, including where to watch, visit Doozers.com


About The Jim Henson Company
The Jim Henson Company has remained an established leader in family entertainment for over 50 years and is recognized worldwide as an innovator in puppetry, animatronics and digital animation. Best known as creators of the world famous Muppets, Henson has received over 50 Emmy Awards and nine Grammy Awards. Recent credits include the Emmy® nominated "Sid the Science Kid," "Dinosaur Train," and “Pajanimals” as well as the new series Doozers." Features include "The Dark Crystal," "Labyrinth," "Mirror Mask" and the upcoming “Alexander and the Terrible, Horrible No Good Day.” Television productions include "Fraggle Rock" the sci-fi cult series "Farscape," and the new reality competition “Jim Henson’s Creature Shop Challenge. For more information, visit the Henson website at http://www.henson.com/


About DHX Media
DHX Media (www.dhxmedia.com) is a leader in the creation, production and licensing of family entertainment rights. DHX Media owns, markets and distributes 9,500 half hours of children's entertainment content, and exploits owned properties through its consumer products licensing business. DHX Media is recognized for brands such as Yo Gabba Gabba!, Caillou, Teletubbies, In the Night Garden, Inspector Gadget, Johnny Test and Super WHY!. DHX Media has offices in Halifax, Toronto, Los Angeles, Vancouver, London, Paris, Barcelona, Milan, Munich and Amsterdam and is listed on the Toronto Stock Exchange.