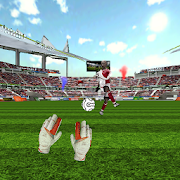 Prevent the football from entering the goalpost and cracking your screen! Do you have what it takes to be a real football game world champion goalkeeper?

You are a goalkeeper tasked with keeping the soccer ball out of your goal posts in the best football goalkeeper game you'll play this year.

Touch the screen and move the goalie gloves around and keep the soccer ball from finding the back of the net.

Good luck and have fun! What is you final football game goalkeeper score?