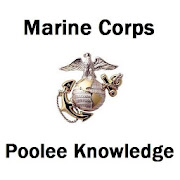 Marine Corps Poolee Knowledge is a mobile reference & study guide for all USMC Poolees and future Marines. It includes everything your recruiters want you to study before getting to Marine Corps boot camp.

2.0 UPDATE: Now includes the same information on a study guide which is given to most recruits during boot camp including:
-Significant Battles
-Significant Dates
-Significant Individuals
-USMC Organization
-UCMJ
-First Aid

Please email us with any problems or suggestions and we will take care of it immediately!