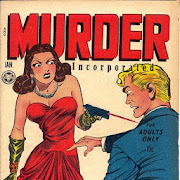 Murder Incorporated was first published by Fox Feature Syndicate in January 1948. The title was an attempt to join the popular comic book crime market and Fox soon followed this up with Famous Crimes and Crimes By Women.

Murder Incorporated attempted to be one of the most shocking of the crime genre. The covers of the first two issues had the words 'For Adults Only'. This was not a legal requirement and in fact it could well have been a ploy to entice children and young adults to buy it.

Navigation: Flip pages as if you were reading the real thing.
Note: This comic is best viewed on a large screen size , as there is no zoom.
Public Domain Comic.