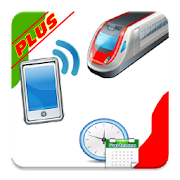 --- WARNING: TO USE OFI+ ACTIVATE GEOLOCALIZATION ON YOUR DEVICE ---

OFI Plus ( Italian Railway Timetable Plus) is a useful app for those traveling by train in Italy .

It uses the concept of localization (also known as geo -fencing ! ) Requiring minimal interaction to the user, which allows you to have always at hand the Billboard hours out of the station .

Depending on the location of the User OFI + gives the whole picture of the departures of the nearest railway station .

In addition, OFI gives the ability to search any station of the Italian network , from the largest to the smallest , and set a time after which presents all departures .

OFI + , for Trenitalia and NTV ( Italian ) , allows you to monitor the status of Train of interest with a single click

OFI + , for Trenitalia and NTV ( Italian ) , allows you to clearly see the train stations of interest with a single click

OFI + does NOT contain Advertisement

OFI + is essential in graphics and fast