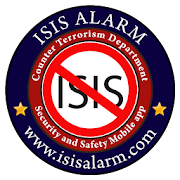 We live in a terrible world where we never know when we will take our last breaths. We are now moving to an almost daily attack, even not a weekly attack!

Will I get shot at school or work? Will a plane hit my building? Will my car, bus, or building blow up? Will I get shot when I'm eating in McDonald? Will I ever be back home when I leave for work? We just don’t know.

The “war on terror” has actually been going on for thousands of years. Countless peoples, countries, races, religions, and empires have fought each other.

Governments will always issue propaganda, and the media will always tell stories during such times of war, but people never know if they should believe what they hear because there has never been a way to see and hear when, for example, a terrorist attack happens during this war.

Until now The “ISIS Alarm” app (Android in English), sends a text alert – and an audio one, if desired – to a mobile device whenever a terrorist attack happens anywhere in Europa the US or many other large cities worldwide. Each alert also states the location of the warnings (Country, city, map). If it happens in the city you are residing, it comes also with an alarm sound.
It is quite an amazing technology and an important life-saver, and the good thing: It is Free and it always will be.

Features:
In case of a threat - a terrorist attack or other emergencies, like a nuclear alert or the collapse of flood defenses the smartphone screen will turn red and you can see a text notification.

Clicking on the notification, the user will be able to access useful advice and best practices on how to behave, tailored on the type of alert and the map to geographical area affected.

If an attack is in progress, the app will suggest, for instance, “to limit your movements to facilitate the intervention of the security forces and emergency services.

The user will also be invited to share the information with his or her contacts on social media: this way, even if just a small percentage of users install the app, they will act as ‘ambassador’ for the alert messages, helping to disseminate them among the population.

We really do hope that the world becomes safe again and nothing ever happens and you never receive any notifications from ISIS Alarm app, but having it installed on your phone, is not a big deal, as it does not use too much battery and does not use GPS. You put your city manually. If your city is not listed, Please contact us!