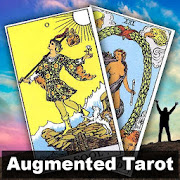 Use the camera on your mobile device to transport yourself into a magical world where Tarot cards come to life with animations and effects!

Enchanted bursts of light, smoke, lightning, birds, butterflies and wild animals emerge from the cards of the traditional Rider Waite Deck as the interpretations of each card are presented (in both "normal" and "reversed" varieties) in a vivid depiction of the Tarot.

Dynamic, animated unique effects and illustrations are presented for each of the Major Arcana, while the Minor Arcana receives a less dramatic but no less attractive and informative visual treatment in this easy-to-use AR-based experience for your Android device.

This app also includes support for Cardboard-style headsets, and other compatible mobile headsets with passthru for the camera. If you can see the camera through the front of your headset, it will work! For headsets such as the View-Master VR with a tinted front piece, it's sometimes best to remove the front piece in dark rooms as the heavy tint can interfere with the camera.

Wearing a mobile VR headset with this Augmented Reality experience can really bring your tarot deck to life!

Please note, this app currently supports only the classic Rider Waite decks, typically referred to as "The Rider Tarot Deck" or "The Original Rider-Waite". This is, by far, the most popular Tarot deck available today and the one most commonly available online or at your local bookstores. Updated (redrawn) decks such as the Illuminated Tarot or the Radiant Rider Wait decks are not currently supported but may be in the future. Additionally, other decks may also be enabled in the future. Let us know what decks you'd like to see!

Application requires a user-supplied Tarot deck, as described above, to provide the augmented reality experience.