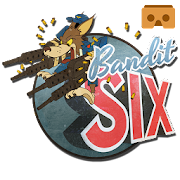 We give you the firepower. You give 'em hell.

**Only Compatible with Google Cardboard 2.0**

Grab your Google Cardboard and take to the skies. Man the tail guns of a World War 2 bomber fending off swarms of attacking fighters as they close in for the kill. You'll face the enemy's deadliest aerial weapons from the iconic Me109 to V2 rockets, jets and missiles.

Designed exclusively for VR where you use your head to aim and the trigger to shoot, Bandit Six delivers intense first-person aerial combat in over 30 missions set amidst skies full of tracer, flak, flames and planes. So man the guns and join the fight.

Please note
Only compatible with Google Cardboard 2.0
Not compatible with bluetooth controllers
You can reset your orientation via the pause menu which is accessed by tilting the device 90 degrees

Lola and the Giant