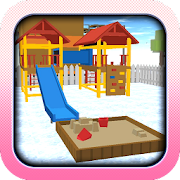 In the north is located small, but very profitable village, which is living its own life. Another cities are miles far away, so the citizens must make do with what they have. The main point in this crafting game is the town hall, which is lying in the middle of the city. Around the hall are some services like the police department, the fire station, auto repair or petrol station. Another dominant point here is the church with large cementary. The most of local citizens live in family houses, which are located around the town. Most of their time they spend in a playground for children, where you can find sandpit, climbing place for kids, benches for sitting etc. Near the city, there is a military base, so it is very common to watch different fighters for example.