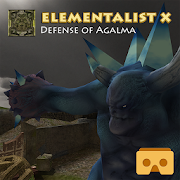 One of Earth's most sacred sites, Agalma, has come under attack from demonic forces. Take the role of an Elementalist, summoned to help secure the site and vanquish evil from within its walls. In this fully immersive experience, you will learn to hone your elements, teleport to gain strategic position, and avoid getting attacked.

Fight through 10 thrilling levels and hordes of evil minions. Complete this mission and face the ultimate boss.

Find out more at http://elementalistx.com