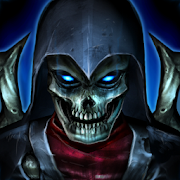 FOR A LIMITED TIME - Part of the Google Play Games Sale

For a tutorial on how to play Hail to the King: Deathbat, watch this video: https://www.youtube.com/watch?v=qN0oE-TpRzc

"This will be a game I keep on my device for a long time to come, and will play and replay many times over just for the sheer fun of it all.” - TouchArcade, Game of the Week Award

“Hail to the King: Deathbat, a game that pushes the limits of mobile gaming and feels almost like a console game." - Kotaku Review

“Provides an unrivaled experience on the format... 8.5/10" - Arcade Sushi Review

"One of the things I look at closely in any game, is the amount of visual variety it has to offer. Hail to the King: Deathbat, delivers on this accord, quite well... really one of the more intriguing visual experiences I’ve had with a mobile game in quite some time. The soundtrack is absolutely phenomenal in this game. 4.4/5" - PocketMeta Review

Hail to the King: Deathbat is a 3rd person, overhead dungeon crawler action-RPG in the vein of traditional 8- and 16-bit console experiences. You play as Andronikos, the resurrected King of the Underworld tasked with reclaiming the lands of Haides from his despotic doppelgänger, placed into power by a sadistic demigod. The game’s design is not for the faint of heart, as players will need to traverse massive levels, combat skillful undead, and best unforgiving bosses. Along the way you’ll mix and match brutal melee combat with projectile magic attacks battling through beautifully designed and hellish landscapes inspired by the band’s iconic discography and artwork. Interact with characters along the way to learn about your surroundings and solve puzzles to unlock the mysteries of Moros Island.

Deathbat is a throwback to classic games from the pre-mobile era of 8- and 16-bit consoles. The graphics, gameplay and even the soundtrack were created in the immortal tradition of those early masterpieces.

Features:
- 10-12 hours of gameplay
- Additional “Nightmare Mode” for those who are able to beat the regular game (adds an additional 10-12 hours of gameplay)
- Features an original score
- No must-purchase upgrades; Price of game includes everything necessary to beat game
- Rich, immersive storyline
- Interact with non-playable characters to learn about and solve the mysteries of the island
- Unlock new weapons and magical abilities to defeat enemy hoards and difficult bosses

A fix was made to work with Android 5.0. There is an intermittent issue with the Google Play achievements popup on the title screen that we are looking into.