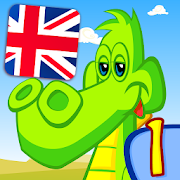 Some of our app reviews:

“Designed specifically for teaching children English, this universal app offers many features that will appeal to parents and children.” by bestappsforkids

★ Play and learn English words with Memo the Dragon ★

Your child will absolutely adore Memo, a cheerful dragon who will guide them through a variety of scenes and lands, thus helping discover new sounds and captivating animations. As your child plays and learns new words, Memo grows bigger and bigger, which encourages and motivates the little learner to keep on exploring the foreign language.

My First English is specially designed for kids and it perfectly suits their needs and abilities. The course includes five interactive scenes packed with funny animations and quizzes that will teach your child 50 popular English words. While learning, your kid’s word recognition memory will be enhanced by the renown SuperMemo algorithm.

Memo the Dragon can give instructions in one of the six languages: English, German, Spanish, French, Russian or Polish.

According to scientific research, kids under the age of 10 are the best learners of foreign languages. With your help, even a toddler can learn their first English words while having fun.