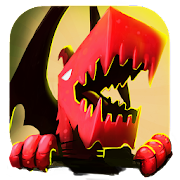 Tap Dragon is a cool game where you breed and nurture dragons all while exploring the world around you. The game has a cool set of animations and astounding 3D graphics, all while integrating a nice little story and perfect tap and clicker mechanics unlike never before.
You will be able to pet dragons and upgrade them in order to get as much income as possible. You will also have to get a weapon in order to damage the monster that comes in your way, so there’s a lot of fun to be had with Tap Dragon!
With Tap Dragon you will always have new challenges and fun moments to enjoy, not to mention that you can come back often to upgrade stuff in this really cool tap and idle RPG.
No matter if you enjoy idle games or just want to play with dragons, this is a really good game that allows you to do just that and so much more. Tap Dragon is a great, enjoyable and repeatable experience that will go on over and over as long as you try to complete the game and have fun in all of its glory.
With Tap Dragon you can have amazing gameplay moments and really good experiences unlike never before. It’s an amazing game with RPG features and a wide range of mechanics that add up to deliver an enjoyable gameplay.
Don’t hesitate and try out Tap Dragon right now, get the ultimate idle RPG on your Android device right now!